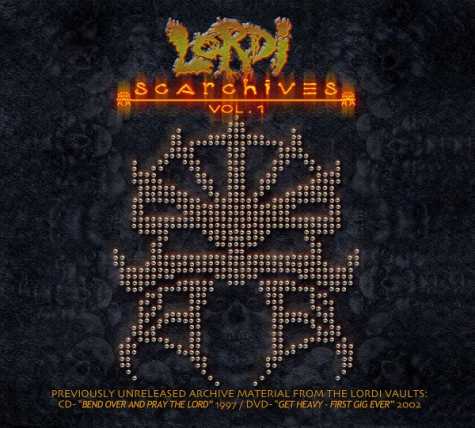 
Mr. Lordi kommenterar Scarchives Vol. 1., ”The proposed box set will NOT come out as a box per se. The items that were supposed to be in the box will be released separately item by item. The reason for this unforeseen change of plans is that all the planned items in the physical box would have raised the production costs so high that the very small, limited quantity of the box would have put the price of each individual box probably unbearable for most of the fans. So it was decided that the best solution is to divide the set in parts. This way the price of each item will not be as pricy, and everyone can decide for themselves what items they want and can afford. So, in a way, the contents of the box set are coming, but the actual physical box is not.”


Han fortsätter, ”The first part to be released is a CD/DVD. It will include the very first unreleased Lordi album, Bend Over And Pray The Lord – The Heavy Rock Album (CD) from 1997. The original booklet is included with no touch-ups whatsoever, plus a long story about making the album. As bonus tracks, Get Heavy, which was added to the album a bit later on, is included, as well as Hulking Dynamo, produced and mixed by late TT Oksala for Get Heavy in 2002, with little additional work done this year by Mikko Karmila. The other part is a DVD, which includes the very first Lordi show from Nosturi, Helsinki 2002. The show was filmed by multiple cameras, and it is completely unfixed and none of the mistakes and embarrassing moments are edited out. The setlist includes, naturally, all the Get Heavy songs. As a bonus, commentary track by myself and a gallery of all the unreleased merchandise from that era.”