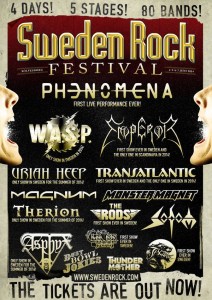 ”Cloven Hoof (UK)
Cloven Hoof was one of the last significant bands of the New Wave Of British Heavy Metal to debut on record. ”Cloven Hoof” arrived in 1984 as a stellar example of anthemic heavy metal of a theatrical, slightly diabolical persuasion. The subsequent ”Fighting back” (1986), ”Dominator” (1988) and ”A sultan’s ransom” (1989) are cult records today. At the time, however, thrash metal ruled the heavier side of the metal scene and Cloven Hoof folded in 1990. In the new millenium they returned to produce releases like ”Eye of the sun” (2206) and ”Throne of damnation” (2010). A new album, ”Resist or serve”, is currently on its way, as Cloven Hoof – as always with bassist and songwriter Lee Payne at the helm – are looking forward to their SRF debut.

Jaguar (UK)
Who invented speed metal? Many would say Jaguar did. Said New Wave Of British Heavy Metal act achieved cult status in 1982 with ”Axe crazy” – the most successful single ever released on the legendary Neat Records. The band’s debut album ”Power games” (1983) was a spearheading classic. Then Jaguar drifted into AOR territory, was abandoned by their audience and disbanded. In 1998 ”Power games” was reissued, so successfully that Jaguar reformed. Since then, guitarist Garry Pepperd and cohorts have mainly been active in a live setting. Now the time has come for their SRF debut, as the band is also preparing their first studio album since ”Run ragged” (2003).”