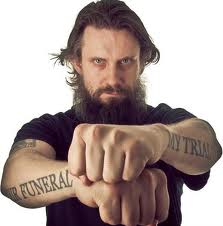 
I’ve taken my time in trying to figure out what went wrong and why everything eventually went to shit.


I left The Haunted back early this spring because I had fucking had it with dysfunctional bullshit.


I knew it was there, fuck, I left the band once before, but at that time I didn’t know as much about emotional dysfunctionality and just how fucking cynical people could be.


When I left, we were a bunch of sad fucking dudes. There was no love in it. None. And really, I doubt very much there had ever been any. In fact I deeply question whether Anders and Jonas Bjoerler have the slightest clue what deep loving friendships, joy and caring is even about. They think in terms of ”Me, me, me, me, mine, mine” to the fullest and most complete.


The reason I up and said ”fuck it” was this; There were drugs involved within the band, and crew members who’s alcoholism/drugabuse was just overlooked and ignored because the individuals in question was cheaper than anyone else and delivered the goods. Local promotors and crew were being treated like they were somekind of underlings and promotors were required to get drugs, even in places as extremely high risk as China and Thailand. Drugs were smuggled.


I am certain they will comment this to make themslf ”free of responsiblity” but when addiction is involved in a group there is no such thing as ”Me me me”. One either says ”No.” Or accepts the mutual responsibility. That’s how it works, that’s the adult way of dealing with that type of dilemma. Not scapegoating individuals with a fucking disease.


I have 2 beautiful and amazing kids that I fucking love and respect. I have overcome addiction myself and one of the things I’ve learned is to not make fucking compromises. For the sake of my kids I need to know that I’m getting home. That I’m getting payed. That noone gets busted for drugs and my kids have to read about their dad’s band gettin busted in the paper. It’s a nasty and very mean-spirited little world out there, one needs a bit of mutual respect and care. Having a backbone is necissary.


I brought the subject up for discussion. I always did. With everything that was fucking with band-spirit.


The response I received was that the noone else minded and that obviously I was the one who had the problem. My problem was caring.


The day the Bjoerlers decided to tell tell us about the At The Gates ”Farewell-tour”( The Farewell tour now on it’s third year…) we were releasing and promoting Versus.


They told us that they would only do 14 shows. They are still touring….


They have really cashed in to the fullest. Good for them. It’s good to have money in a capitalist world.


Jensen is the one who saw clearly what was up.


The moment they told us, his response was ”You know this is going to kill The Haunted.”. The Twins were both extremely defensive about it, and now we know why. They were lying out their ass.


Jensen ain’t no dumb-ass. He made another Witchery record, toured like a sonofabitch with his project and got a degree in the meantime.


Good for him.
It’s good to have a degree in a capitalist world.


I caught on slower, but I figured it was fucking ridiculously slow that making Unseen took 2 years. I must have written 40 fucking songs for that record. Everytime I presented something it wasn’t ”played well enough to really hear what’s going on” or ”it’s not The Haunted”. Jonas presented som amazing ideas. But there was no heart.


I actually gave up on that band in the process.


The twins were unwilling to the extremest. They didn’t like the rehearsal space , so we tried working here at the house, which is an incrdibly beautful enviroment. But that was uncomfortable. It was too warm. It was too demanding talking to eachother. At one point I told Jonas ”Dude, you don’t even listen to what people say do you?”, ”Yes I do!” ”So what did I just talk about?” He tried explaining what he thought I had said and made it clear that he’d stopped listening after I had finished my first sentence. The disliked working with Tue Madsen. Quietly whining like spoiled 5-year olds. It became so slear that they just don’t care. About anyone else, except the absolute closest to themselves. Completely indifferent, unless there would be consequences that affect them.


No. They don’t have kids. Thank Lucifer.


The only one who actually gave me real feedback was Per Möller Jensen.


Jensens ideas, I really gave it my all to make good songs out of and it was happening, but the twins just didn’t want to use them or even work on them.


Eventually we had an album. Some like it, some don’t. Jonas booked shows. As he did for At The Gates. But the band was fucking dead.


The last touring we did just clarified it all too fine. Hours and hours of silence. Like always with The Haunted. Silence. Indifference.


I am not a very cheerfulful person. I prefer working to hanging out. Because I love my work more than I love people. I don’t lie or pretend it’s any other way. But anyone who knows me will testify that I am not a lying, unloyal, uncaring, indifferent fucking prick who’s emotional incapacities render me void of treating people respectfully.


This is what I have to say; Anders and Jonas Bjoerlerare two of the most fucked up emotionally dysfunctional pieces of shit I have ever worked with except for Petri H. Lunden (who is a full-blown psychopath). I would have given them my fucking life.


They would barely break a sweat in return.


Rock n roll for me is about love, hate, life and how we live it. It’s vivid, aware, right here. Indifference and shutting eachother off is the diametric opposite. Watching your back because you care more about your pension-plan than your fellow travellers, avoiding confrontations because one is lazy and a coward etc. is just not fucking cutting it.


They broke my fucking heart.


In my eyes Anders and Jonas Bjoerler are nothing more than two deceptive accountants. I’m sure they are many other things as well.


But one thing they will never ever have again, is my respect, my trust or care.


Now here’s the pun; Writing this, will be, to them; Over-reacting.


I have damn near killed myself working to get back on my feet after this whole fuck of a botched cock-up. I am not over-reacting. Fuck. I don’t don’t even know if Per Möller Jensen is alive. I haven’t heard from him for months, and the last six months I was still in the band he was homeless.


I am not over-reacting.


The facts remains; They lied. They fucked the other three of us. And they pissed all over every single moment of passion, pain and awe we shared. And to me, that means that they fucked all The Haunteds and At The Gates fans too.


Because I truthfully don’t think they ever really felt it. I truthfully believe them to be too emotionally disturbed.


I give this back to them.