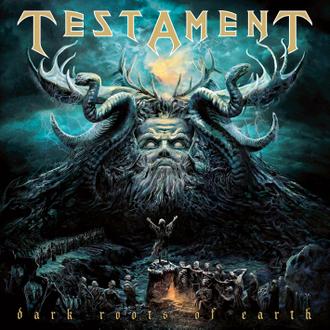 
Testament’s frontman Chuck Billy kommenterar albumet, ”We [recorded] it at our place in Oakland and at Trident Studios and Andy [Sneap, producer] came out and did all the recordings with us — as much as he could — and then we finished off some vocals and guitars at Trident Studios. I think over the years Andy really knows the sound of this band, and kinda knows what we want. We’ve mixed stuff with Andy, so I think he knows without has having to be there physically with him what we are looking for. And I just haven’t heard anybody in metal come out with any better mixes! Honesty!”


Angående några av låtarna på albumet säger Billy, ”Well, there’s a song called Native Blood, which is basically a song about my Native heritage. It’s almost like a protest song, that the Native Americans have a voice that needs to be heard — that’s the chorus of the song. There’s another called True American Hate, which was kinds inspired by when we sent all our troops overseas there, and we were just seeing in the news when all that was going on a lot of young kids, under 10 years old, out there with their families burning American flags. And that was a pretty shocking thing to see, to see that generation, a kid that young being taught to hate that much. It makes you think what’s going to happen, 10 to 15 years from now when the majority of these kids have just been raised to hate? It struck me as a little odd. There’s a song called Cold Embrace, which we kinda hoped we’d be able to pitch the song into one of the Twilight series movies; it’s a song about a girl becoming a vampire and never being able to see the sun again. The Dark Roots Of Earth is kind of a play on the band we have together, just like a metaphor, like Testament is a tree and all of us in this group are really embedded in the planet, in the earth, the environment and our surroundings. It was kind of a play on that. Rise Up For War is more of a war song, like your preparing yourself for war, going into battle. There is a lot of cool stuff there.”