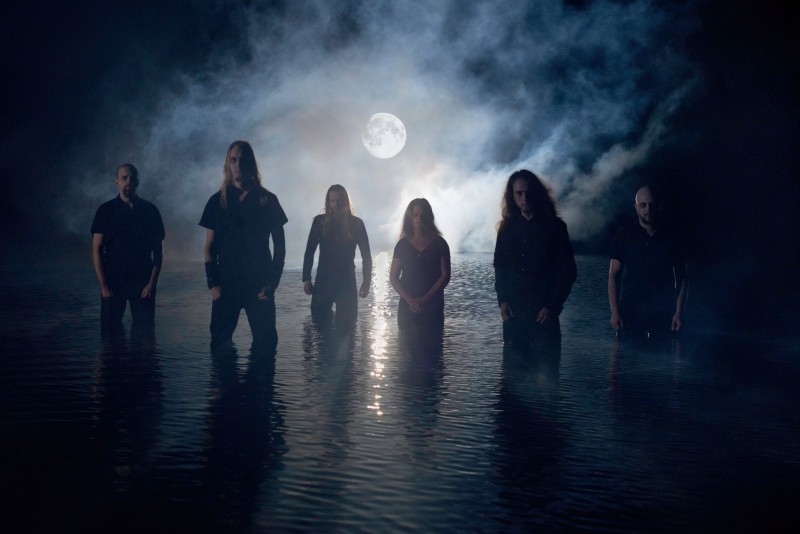 To put it briefly, ”Ei valo minua seuraa” is a story about journey towards inner equilibrium. Harmaudesta begins the story with the main character realizing the fact his current way of living has estranged him from his true nature, values and passions and therefore made him a miserable shadow of his former self. There must be a way out. Harmaudesta was the first song composed that made it to the album. It’s a compact, straightforward and utterly melodic track that builds up the tension for the rest of the album quite nicely.

How much is an individual life change able to satisfy you, if you are aware of that the roots of the problem are deep in the basic structures of mankind and society? Not much, if you get stuck with that thought. Jälkemme represents the more up-tempo ass kicking of the album. But not at the expense of great melodies, of course. Also, those deliciously resonating drums at the beginning still gives me the chills. This song should please the ones that enjoy their metal preferably ”black”.

The experience of powerlessness and losing control can be a passage to the depths dominated by self-hatred and pity. Direct translation for the title ”Itsetön” would be ”without a self”. According to ancient Finnish beliefs ”itse” (or ”self”) is a part of the human soul or a shadow soul that is separate from your actual, conscious ”selfdom”. One can lose or taint one’s ”itse” by, for example, wallowing in extreme guilt, depression, self-hate and so on. Losing ”itse” would lead you to a bottomless, hopeless and sickening darkness and misery. Music wise, Itsetön wanders from a dark dimension to the next, slowly reaching towards distant light only to be taken down again and again. This might the most guitar-driven song on the album but it basically has everything.

The main character of story gets buried in his thoughts which leads him to deep introspection and ends up in dialogue with those parts of his mind and soul he’d rather leave untouched. Yet it’s both inevitable and essential. The mind has to be shattered first to become whole once more. Sieluni varjossa is quite complex and experimental song by it’s structure. It proceeds from more of an acoustic atmospheres to catchy riffages, glorius choruses, haunting slow-paced moments and crushing blasts.

Time to get away. Forests and lakesides represent peace, silence and one kind of sanctuary or haven for Finnish folk. A place where you can rest your soul and gather your thoughts. Vaipunut is a one of the turning points of the storyline and brings up hints of hope to the horizon. It can also be considered as a prelude for Yksin. Musically Vaipunut differs remarkably from all of our previous material. It was the last song to make it on the album and was completely finished only the same week we had started mixing. One of our collective favourites and it brings a fresh variety for the album.

The surrounding world is no more, your mind has broke out of its shackles and is one with its shadows. At last you are truly alone, unleashed from everything and everyone and ready to try to make your way back to the surface and redefine yourself. But you will keep falling to the bottom if you don’t act. We made a music video of this song which supports the story. Yksin is also quite different in comparison to what we have done on our previous releases and it expands our ways of expression to new territories.

Hiljainen raunio (transl. silent ruin) is used as a metaphor for a person who is broken inside but seems to be doing fine in the eyes of others. Nothing could ever fully heal the deep wounds people cause to themselves nor will you ever get back the time that is lost but there might often be hope for better times. But in the end you are the only one who is able to pull yourself out of the misery for good. Whatever that means for you. We shouldn’t let external pressure or other people to influence our decisions and thoughts too much; instead we should find our own paths which would make our lives worth living and make it possible to be true to our nature. This song summarizes the themes of the album in it’s own way. It also offers the biggest and the most epic soundscapes we have ever done so far. Huge topics demand huge songs and the other way around. There couldn’t have been better or more suitable song to end this journey.